I love to swirl soap! Whether it is a peacock swirl, a column swirl, a basic slab swirl or a free design swirl…swirling is fun because you get to be creative in color and design! I don’t think I’ve seen a bad swirl.

How to create a slow moving soap recipe

These are the three main elements in the soap making process that effect how quickly or slowly a recipe reaches emulsion and trace.

Higher temps during the mixing stage of soap making make the soap move faster to trace.  So to slow down trace…lower the temps of your lye solution and melted oils.  Depending on my recipe, I like to be at about 85-95°F.

To speed up trace, use higher temps.  About the only time I want to speed up trace is when I’m making a soap that contains a high amount of olive oil such as a Castile soap, when I’m piping soap (cupcakes) or when I’m layering soap. For swirling, keep your temps cool.

Use oils that are slow to trace.  Usually unsaturated fats are slower moving and include oils such as olive, almond, avocado, rice bran…etc.  Pomace olive oil traces faster than regular olive oil. I personally always use Refined A Olive Oil from Soapers Choice.  Palm oil traces faster than lard. If you aren’t opposed to animal products in your soap, try some lard for a slow moving recipe.  Castor oil will speed up trace, so only use it in smaller quantities.

Shoot for a recipe with 50-60%+ in olive oil and other liquid oils.

Olive oil in initially soft upon unmolding but cures out to be rock hard.

Fragrance oils can cause a recipe to speed up as well. Make sure the FO that you choose has been tested with CP soap and does not cause acceleration. Stay away from floral and spice oils as those tend to accelerate.

My go-to fragrance oil when I want to attempt a new swirl is Energy from Bramble Berry. I swear…I think that oil slows down trace! I love it!

Some essential oils can speed up trace. These mostly include spices such as cinnamon, cassia, bay and clove.

Add your fragrance oils or essential oils to your melted oils BEFORE mixing with your lye solution.

Especially if you’re new to soaping, you’ll see the word trace pop up in soap making books, online guides and forums. You’ll hear, “Mix your lye solution with your oils and stick blend (or stir by hand) until you reach trace. It is then safe to pour your soap into your mold,” …or something along those lines. Most resources don’t discuss the importance of a stable emulsion and lead new soapers to believe they have to get to this occurrence called trace…or they won’t have soap. Emulsion is just as important as trace.

At one time or another every new soap maker wants to try their hand at swirling. Usually when you swirl, you divide up your soap batter, color each one and swirl into your mold using different swirling techniques. Mixing until emulsified and then dividing up your batter gives you much more time to color, scent and execute your swirl. If you were to divide at trace, color and attempt to swirl…you’ll end up glopping the mixture into the mold instead of swirling.

Emulsion is when you have mixed your oils and melted fats with your lye solution until your mixture appears homogenous. We look for a stable emulsion in that if you pause for a second or two…it does not separate out. It stays emulsified. You should not have any oil floating on top and your soap batter should be consistently creamy in appearance. Depending on your oils it should still be quite thin.

Trace is when a mark made on the surface of the soap remains or when soap drizzled on top of the surface remains for a noticeable amount of time before falling back into the mixture. Soap that has been brought to trace is quite thick. To test for trace simply lift your stick blender out of your mixture and drizzle a bit on top. If this drizzle sits on the surface then you have trace. Try to stop mixing before you reach trace.

A visual of Emulsion versus Trace

Below, I’ve just added my lye solution to the oils. The lye sinks and is starting to emulsify with the oils. The top layer is all oil. 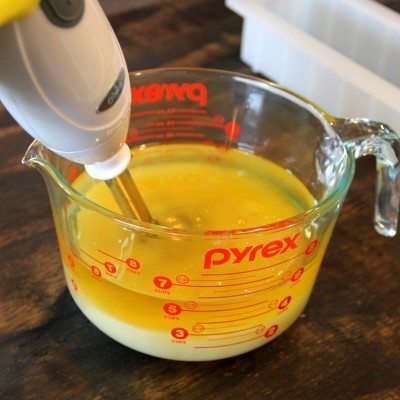 The soap below still has visible oil separated from the mixture. Keep mixing! 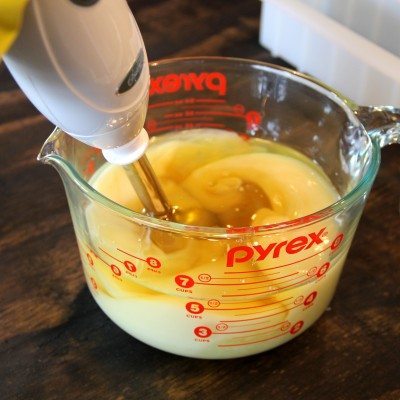 Below is perfectly emulsified soap. There is no oil floating in streaks or on top of the mixture. We’re not quite to trace, which is good. This is the point at which you would want to to separate your soap out to color for a swirl. 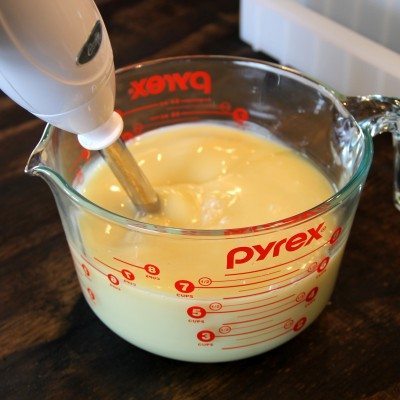 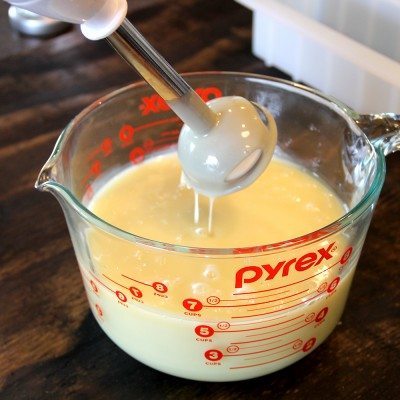 Below, the soap has traced. If you’ve gotten to trace, then you have usually gone too far for creating intricate swirls. 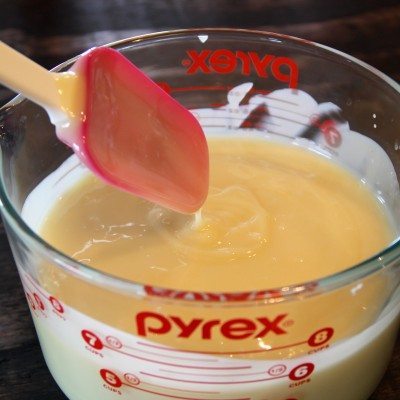 I hope these tips help you when you are trying a swirl!